Can Light Therapy Help the Brain?

Can Light Therapy Help the Brain?

Brain photobiomodulation or transcranial photobiomodulation (tPBM) is the process of using near-infrared (NIR) light to improve brain functions. For example, cognitive activity and mental acuity are some of the functions that can be improved. The tPBM is a bioenergetics process which affects cellular functions. Thus, it stimulates the photosensitive cytochrome c oxidase enzyme within mitochondria (the energy source of neurons and some other cells) to produce more ATP (adenosine triphosphate). ATP acts to store and transfer chemical energy inside cells. Hence, it converts NIR light energy into energy needed for cellular functions. For example, this is similar to the conversion of nutrients from food into metabolic energy, but with photons as the energy source. Additionally, photobiomodulation enhances nitric oxide synthesis, resulting in vasodilation (expansion of blood vessels) and increased cerebral blood flow (blood flow to the brain).

The therapeutic effects of brain photobiomodulation therapy are enhanced oxygenation[1], brain energy metabolism[2], neuronal protection[3] and neurogenesis[4](production of neurons). Most importantly, these factors can trigger an increase in mental acuity and improvement in brain functions. All these facts point to an affirmative answer to the the question of “can light therapy help the brain?”Above all, tPBM is completely non-invasive, has no significant side effects and dose not employ any artificial chemicals. Furthermore, the light does penetrate deep enough to reach the brain and numerous studies support this as a fact. If you’d like to learn more about the penetration of near infrared light through the skull, you can read this article.

Moreover, pre-clinical studies by researchers at the University of California San Francisco on dementia patients showed that transcranial PBM can enhance cerebral blood flow and neural connectivity in specific brain regions. Lastly, researchers at the Veterans Affairs Boston Healthcare System are investigating the efficacy of brain photobiomodulation to treat gulf war illness. You can read more ongoing and completed, and published research on this page which has a list of studies with links.

Mechanisms that help to answer the question
of “can light therapy help the brain?” 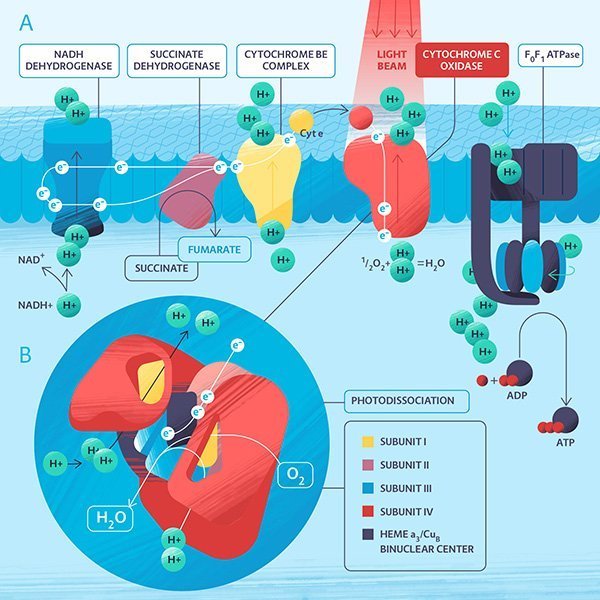 A) Photobiomodulation stimulates cytochrome c oxidase, which increases ATP synthesis.
This results in the enhancement of neuronal respiration and metabolism.

B) Photobiomodulation dissociates nitric oxide from the center, increasing the proton gradient.
(The proton gradient is a product of the electron transport chain. A higher concentration of protons
outside the inner membrane of the mitochondria than inside the membrane is the driving force
behind ATP synthesis).

Brain photobiomodulation has an enhancing effect on neuronal mitochondria without any negative side effects or harmful chemicals. Additionally, brain disorders are commonly caused by mitochondrial dysfunction[6] because brain tissue is rich in mitochondria[7].

The discovery of the effect of brain photobiomodulation PBM on neural activities and brain oscillations is groundbreaking. In this cross-over, double-blind study, the results revealed a significant effect of transcranial near-infrared light (810 nm wavelength) at a 40 Hz pulsing rate. The effects were on the power, functional connectivity and synchronization of endogenous brain activity.

The potential of brain PBM to modulate brain activity opens new opportunities for research and therapy. In a published study, delivering NIR light energy pulsed at 40 Hz to the hubs of the default mode network significantly increases the power of the high oscillatory frequencies of alpha, beta and gamma. Ultimately, this points towards the potential of brain PBM to improve focus and memory encoding.

Blood flow to the brain is vital because neurons need oxygen to function properly. Inadequate blood flow to the brain has been linked to several dysfunctions, such as depression and anxiety. According to pre-clinical findings, tPBM could potentially increase nitric oxide in neurons, which leads to an increase in cerebral blood flow[10]. Furthermore, in the most recent clinical investigations by the University of Texas, improvement in cerebral oxygenation was found both during and following transcranial laser irradiation.[11]

Clinical research using Vielight technology by the University of California, San Francisco, on people with dementia has shown that brain photobiomodulation can increase cerebral blood flow. Thus, leading to an overall increase in their cognitive function.

In an early study[12], researchers assessed the anti-inflammatory effects of NIR lasers on the alteration of cerebral interleukins in cryogenic brain injury. Notebly, they found a decreased level at 24 hours compared to 6 hours. In addition, brain photobiomodulation activated cellular immunity via increasing the presence of interleukins in blood cells at 20 days post-stroke.

To sum up, these studies supports the idea that the anti-inflammatory effects of brain PBM may be due to its ability to modulate microglial activity.

Increased expression of neurotrophins (proteins inducing survival and development of neurons) may account for observations of stimulation of neurogenesis.[13] The neurogenesis effects of tPBM was demonstrated in TBI mice models.[14] In a series of studies, researchers determined the optimal regimen of tPBM (810 nm) for neuroprotection in mice with TBI. As a result, they reported that tPBM sessions, delivered for 1 to 3 consecutive days, notably stimulated neurogenesis.

At this point you hopefully feel more confident in answering the question posed in the subject of this article, “Can light therapy help the brain?”. Considering all the research noted in  this article, the answer seems to be self-evident. Because neural tissues contain large amounts of mitochondrial cytochrome c oxidase, brain photobiomodulation has great potential. Improving mental acuity through enhanced cerebral metabolic function and blood flow, stimulating neurogenesis and providing neuroprotection are the most important effects of brain PBM therapy. 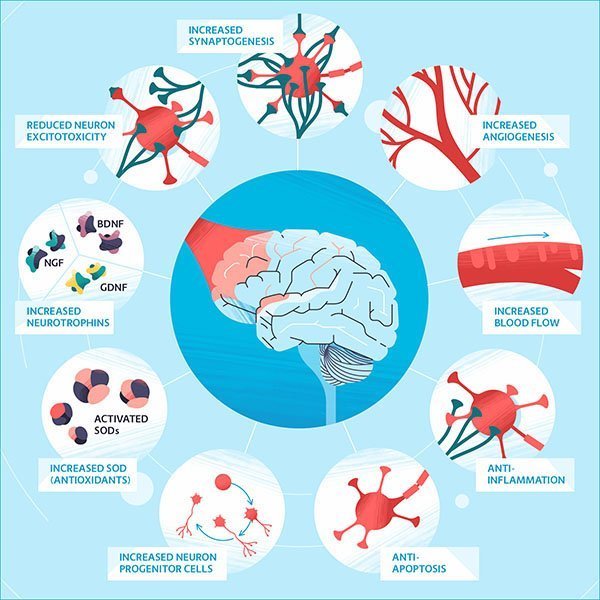