Vielight has been closely identified by its intranasal technology. This is where a uniquely designed nasal applicator delivers light of the specific wavelengths in the nasal cavity. The patent for this technology was granted to Dr. Lew Lim, the Founder and CEO of the company.

Over the years, many have questioned whether intranasal PBM really had any effect on the brain and blood. It was never an easily intuitive concept. Therefore, an interim report is particularly significant in the light of these circumstances. It is an ongoing controlled study which has revealed that the intranasal applicator of the Neuro Alpha increases the power spectrum of the alpha waves at around 10 Hz when the same oscillation is induced.

The study conforms to high standards of research, as it is double-blind (the subjects and the clinical investigator do not know whether the test device is real or sham). The main objective of this study was to observe whether there are any changes to brain under different conditions. One of these conditions involved the use of only the intranasal applicator. At the interim reporting stage, the data from 10 out of the intended 25 subjects was collected and analyzed. The study is expected to complete in October 2019, with full analysis in November 2019.

This study is a replication of the recently published Neuro Gamma study (https://www.nature.com/articles/s41598-019-42693-x) which showed that by inducing gamma oscillation at 40 Hz to the brain, the brain responded with significant increases in the power spectrum of the fast brain waves, alpha (8 to 12 Hz), Beta (12 to 30 Hz) and Gamma (30 Hz and above). These increases were accompanied with a reduction in the power spectrum of the slower delta (1 to 4 Hz) and Theta (4 to 8 Hz). However, in this new study, when inducing alpha at 10 Hz, the affected brain oscillation is only around 10 Hz. Hence, this finding tells us that the brain has specific response to pulse frequency inducement.

Dr. Lew Lim says, “The interim analyses of the Alpha study, along with the earlier Gamma study, have exciting implications. The findings can help to open the path for individualized treatments. The latter can be based on varying pulse frequencies, knowing that they have specific effects on the brain. We are now more confident that this feature of varying pulse frequencies, available in the Neuro Pro (a model under development), could be very impactful.”

Photobiomodulation Makes its Mark on Neurofeedback

The events of September 19, 2019 at the ISNR (International Society for Neurofeedback & Research) conference could be remembered as the day photobiomodulation (PBM) received serious recognition in the field of neurofeedback (NFB). While 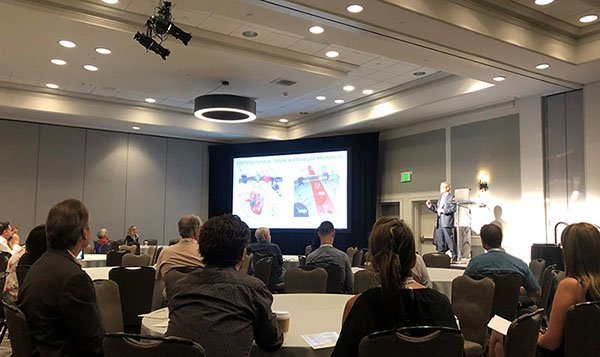 much of the practice of NFB seeks to improve brain functions through incremental operant conditioning, PBM appears to be able to dramatically speed up the process. Thus, this makes PBM a powerful adjunct to NFB practice for successful outcomes. On that day, Dr. Lim and members of the Vielight team delivered a plenary presentation, product demonstration and a 3-hour workshop. For many NFB attendees at these events, it was the first time they were shown the possibilities and potential of incorporating PBM into neurofeedback practice.

Many retired athletes and war veterans share the common problems of post-concussion symptoms from traumatic brain injury (TBI) and chronic pain. This means spending their retirement years in pain instead of enjoying the joys of retirement. In addition, many war veterans suffer from post-traumatic stress disorder (PTSD) which greatly reduces the quality of normal civilian life. These crippling conditions were discussed extensively during the Hyperbaric Oxygen Therapy (HBOT) conference, in September 2019. In the large number of discussions held at this conference, photobiomodulation (PBM) was appreciated as complementary to HBOT. They both appear to improve brain functions and recovery. Presented evidence seemed to support the benefits of combination therapy. The early evidence showed that when HBOT and intranasal-transcranial PBM technology are combined, their cumulative effects are significantly enhanced. All of this warrants more investigations before any claim can be made.